Are Your Ready for April's Cheesy Challenge? Halloumi! 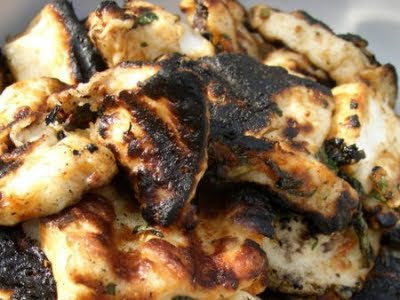 Photo of Grilled Halloumi Cheese - Squidoo.com
After exploring lots of easy and delicious fresh cheeses lately, we have stepped up the challenge this month - and are making Halloumi!

Halloumi or haloumi (Greek χαλούμι, Turkish hellim, Arabic حلوم ḥallūm) is a traditional Cypriot cheese that is also popular in the rest of the Middle East and Greece, and is now made the world over. It is made from a mixture of goat's and sheep milk, although some halloumi can be bought that also contains cow's milk. It has a high melting point, and so can easily be fried or grilled. Halloumi is set with rennet, and is unusual in that no acid or acid-producing bacterium is used in its preparation.

Halloumi cheese originated in Cyprus and was initially made during the Medieval Byzantine period, subsequently gaining popularity throughout the rest of the Middle East region. Industrial halloumi contains more cow's milk than goat and sheep milk. This reduces the cost but changes the taste and the grilling properties.

The cheese is white, with a distinctive layered texture, similar to mozzarella, and has a salty flavour. It is stored in its natural juices with salt-water, and can keep for up to a year if frozen below −18 °C (0 °F) and defrosted to +4 °C (39 °F) for sale at supermarkets. It is often garnished with mint to add to the taste. Traditionally, the mint leaves were used as a preservative, the use serendipitously discovered when the fresh Halloumi was kept wrapped for freshness and flavour from the mint leaves. Hence, if you look closely, many packaged Halloumi will have bits of mint leaf on the surface of the cheese.

It is used in cooking, as it can be fried until brown without melting due to its higher-than-normal melting point, making it a good cheese for frying or grilling (such as in saganaki), as an ingredient in salads, or fried and served with vegetables. Cypriots like eating halloumi with watermelon in the warm months, and as halloumi and lountza - a combination of halloumi cheese and either a slice of smoked pork, or a soft lamb sausage.

The resistance to melting comes from the fresh curd being heated before being shaped and placed in brine.Traditional halloumi is a semicircular shape, about the size of a large wallet, weighing 220-270 g. The fat content is approximately 25% wet weight, 47% dry weight with about 17% protein. Its firm texture when cooked causes it to squeak on the teeth when being consumed.

Traditional artisan halloumi is made from unpasteurised sheep and goats milk. Many people also like halloumi that has been aged; it is much drier, much stronger and much saltier. It is easy to find this traditional product in shops. It is kept in its own brine. This cheese is very different from the milder halloumi that Western chefs use as an ingredient.

Although it is made worldwide and is of rather disputed origin due to the mixed cultures in the Levant and East Mediterranean, halloumi is currently registered as a protected Cypriot product within the US (since the 1990s) but not the EU. The delay in registering the name halloumi with the EU has been largely due to a conflict between dairy producers and sheep and goat farmers as to whether registered halloumi will contain cow’s milk or not and if so, at what ratios with sheep and goat’s milk. If it is registered as a PDO (Protected designation of origin) it will enjoy the same safeguard as 600 or so other agricultural products such as feta and parmesan cheese.

Heat the milk in a double boiler to 86F (31C), then add the starter culture and blend for two minutes.

Maintaining the target temperature of 86F, add the rennet & calcium chloride, stir for one minute, and let rest for forty minutes, or until a clean break. To test for a clean break, use a curd knife to make one cut through the curds.

Cut curds into 1/2" (about 1cm) cubes, trying to keep them as uniform as possible.
Slowly heat curds to 104F (40C); this should take forty-five minutes. Continually stir the curds to keep them from matting. Once the curds reach target temperature, maintain the curds at that temperature for an additional twenty minutes while continuing to stir.

Drain the whey off curds into a cheese cloth-lined colander that is set in a catch bowl. Reserve the whey.

Heat the reserved whey in a pan to 190F (88C). Take the cheese out of the mould, and cut it into 2" (5cm) thick strips. Put the strips into the heated whey, maintaining the target temperature for one hour.

The cheese should have a thick consistency. Drain it into the cheese cloth-lined colander, and let it rest at room temperature for twenty minutes.

Coat the cheese with 1/2 cup (145g) of cheese salt, and let it rest for two hours at room temperature.

Notes
Use this or any recipe that you like for halloumi
Leave milk out of fridge for a couple of hours before starting the cheese-making.

Brine Solution
A brine is a supesaturated solution of salt and water, in which cheeses are literally bathed. (Brine solution consists of 2 pounds (905g) of salt stirred into and dissolved in 1 gallon (4.5 l) of water, heated to 190F (88C).
The types of cheeses that are usually brined are hard cheeses, such as Gouda and Emmental.
Brining occurs directly after a cheese is removed from the press. The cheese is literally dunked into this salty bath. Once in a the brine, the cheese begins to absorb salt, and the proteins begin to harden and form the rind.

This is a big one, lots of luck to all of us for mastering Halloumi!!

Scary! I think my mesophilic culture has gone off, so I will have to see if I can get more in time!

Wow! That is a big step up. Halloumi is one of my favorite cheeses--can't wait to see what you guys do with it.

Time to order new supplies!! I'm excited and nervous...a little more complicated, but can't wait! I have never been able to find halloumi around me, so if this works, I never have to search again. Yay!! :D

Wow - halloumi is an awesome cheese! I'm excited to see how you all serve it:D

Any thoughts on how to press at different pressures?

Foodycat - I was thinking bricks.
This is a toughie!

Foodycat - I was thinking of using bricks.

Will you calculate the pressure or just go for "really heavy"? - I am thinking the latter myself!

Foody - probably in the "really heavy" category. Remember, I sat on the last cheese! (on a plate, that is) :)

Finally ordered the supplies I needed...hope I get them in time...I almost forgot!! Any progress so far???

Not yet - but I found some bricks that I will use for the weights. I am thinking of starting Thursday.. and am very intimidated! A real challenge, to be sure.

I don't think I am going to make the deadline - because of the volcanic ash, my supplies haven't made it through. Can I have an extension please Miss? I think I need an extra week.

Absolutely! We'll post the round-up a little later, as this was a tough challenge.
Cheers!

Yes, I was thinking we'd need to extend this one a bit, too...still waiting on mine (due to my own slowness, not volcanic ash, but...)

Okay, how about May 15th? I'll change the end date on the sidebar.
Cheers,
N.

It's working! It's working! My Halloumi is working!! SOOOOOO EXCITED! I ended up using round dumbbell weights wrapped in foil to press...perfect! :) Another 1 1/2 or so of press time and I'll update with final result! Woo Hoo...cheese excites me. ;p

May 15 should be just fine! Thanks!

Emergency! EMergency! When do I use the brine?! Do I coat the cheese in salt or do I dunk it in brine???

Hi Foodycat - we had the same question. I had sent out an email about the book's lapse of instruction here - but I should have added to the post too.
I added a handful of pickling salt to some warm leftover whey and put the cheese back in there for a while.
Seemed to work.
No worries, this seems to be a very forgiving cheese - and we'll use a different book for the next one!
Good luck, can't wait to see your results!

Thank you! It's looking fab so far!

Yeah, it needs that salt somehow though...adding it to the whey seemed to work pretty well. I also added it to the oil I drizzled on the finished product....good luck!

We love to grill halloumi, so my family would be thrilled if we used homemade halloumi, I think. But what is mesophilic direct-set culture? I did find an online-source for all those cheesy things, but since I'm in Germany, everything has German names, and I can't figure out what that mesophilic etc. culture could be. Can you explain it so I can ask those cheese people if they have it? Thanks a lot in advance!

We are currently forging...

Now, where did I see that?

Follow recipes at your own risk - if you have food sensitivities, allergies or a compromised immune system: please make wise choices about what and how you cook.
If you are uncertain whether you can tolerate certain foods, methods or preparations, please consult your physician.